Rumbach Sebestyén utca 9. An old, neglected block of flats close to the Great Synagoge of Budapest, it should not have dared to dream that its address – though abbreviated – will be the name of a theatre.

It is worth having a look at the way in which the RS9 Theatre has been working there for 26 years.
It is a real struggle for life.A struggle for money, tolerance, support, survival. By what? By talent, good houses, faithful audience, the attention of those involved int he art of theatre and possibilities of international comparison.

RS9 was performing two plays in Edinburgh both by Polish authors Operetka by Gombrowicz and The Wedding by Stanislaw Wyspianski. The plays were chosen for their relevance to Eastern Europe and because of the ties of common history and oppression that bind Hungary and Poland.

Desire to Become Indians based on Franz Kafka’s Amerika was performed all over the world in England, Scotland, Roumania, Poland and the United States. It was an invigorating and gutsy production. Theatre is the only communal art. A ritual way of breathing together.

RS9 is always open to the performances of other theatre groups and other art forms.
There are performances from Budapest, from the country, from Hungarian theatres outside the border, foreign performances and also dance, literary readings recitals, contemporary music events. 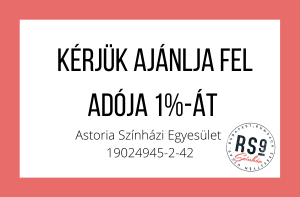